We’re excited to announce that singer/songwriter, actor, and author Loudon Wainwright III has joined the Writings and Riffs lineup of presenters. His memoir, Liner Notes: On Parents & Children, Exes & Excess, Death & Decay, & a Few of My Other Favorite Things, was published earlier this month, and he’s going to join the FoCo Book Festival to discuss his life, lyrics, relationships, and major influences. 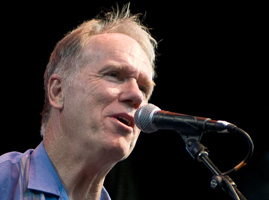 Plus, he’s even going to play a bit of live music for us!

Wainwright, the son of esteemed Life magazine columnist Loudon Wainwright, Jr., is the patriarch of one of America’s great musical families. With a career spanning more than four decades, Wainwright has established himself as one of the most enduring singer-songwriters who emerged from the late 1960s. Not only does he perform regularly across America and in Europe, but he is a sought-after actor, having appeared in many movies and TV series.